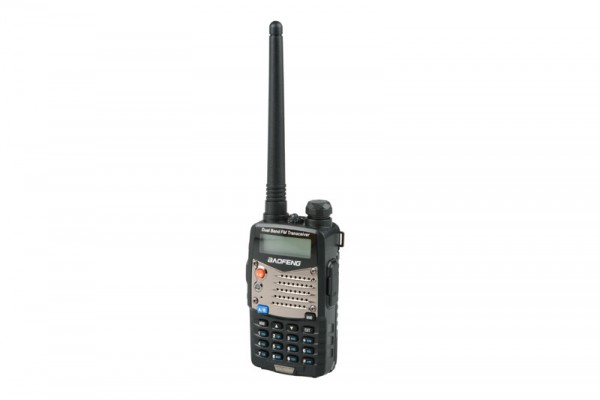 A classic and well-known Baofeng UV-5RA radio is a so-called dual band, which means a radio that operates in two bands - VHF and UHF. However, dual band is not the only thing that this device has to offer. Baofeng UV-5RA model many other elements have been doubled making it a truly universal device for radio communication over air as well as land and sea.

One of the most innovative functions available in Baofeng UV-5RA is a dual work mode of the transmit-receive system and the display, which allows to operate in a specified band in two different frequencies (transmit/playback in main frequency + playback in auxiliary frequency) using a dedicated button for switching of the main frequency. Baofeng UV-5RA features a wide array of functions that simplify identification and grouping (R-DCS, R-CTS, T-DCS, T-CTS, DTMFST; ANI), usage (transmit lock on an occupied channel, voice confirmation of task execution, voice activated transmission, manual keyboard lock, battery saving mode) and programming (programming with a computer via RS or USB).

Functions improving security (SOS) and usability (FM 76-108MHz radio, flashlight) are also available. In Baofeng UV-5RA majority of functions have assigned specific hotkeys, which eliminates the need to progress through a multi-level menu each and every time. The illuminated LCD display apart from alphanumeric signs shows also icons that inform about the status of majority of in-built functions. Baofeng UV-5RA can easily fit inside the user’s hand and ergonomically placed keys allow for operation with just one hand. The model’s casing was made from a thick layer of hard polymer, which significantly raises its mechanical resistance. The radio is also resistant to harsh weather conditions. It can work in temperatures ranging from -20*C up to +60*C. Baofeng UV-5RA is a radio with wide array of features as well a durable and reliable construction.

·         DTMF and ANI Functions (ANI programmable with a computer)